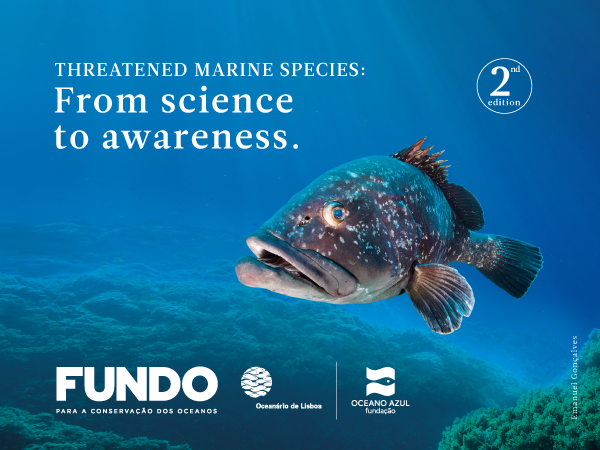 150 thousand euros for the conservation of endangered marine species

Oceanário de Lisboa and the Oceano Azul Foundation present the 2nd “Ocean Conservation Fund”, a 150,000-euro fund to support projects that contribute to the conservation of marine species. Due to the success of the first edition, this year investment in the Fund has increased by 50,000 euros.

On the theme of “Endangered Marine Species. From Science to Awareness”, this year’s Fund will support conservation projects for marine species that are classified as Critically Endangered, Endangered and Vulnerable on the Red List of the International Union for Conservation of Nature (IUCN).

After 20 years supporting ocean conservation, Oceanário de Lisboa and the Oceano Azul Foundation seek to not only encourage protection of endangered species, by funding and supporting scientific knowledge, but also to raise awareness of the importance of the balance of the ocean and marine resources, sharing the view that conservation of the ocean is everybody’s responsibility.

To be eligible, projects submitted must show significant potential to contribute to the conservation of target species, and must also include work in situ, guarantee the scientific quality of information, constitute sustainable initiatives and boost education. It is also crucial for them to present a strong component of dissemination of knowledge, not only of a technical and scientific nature, but also to members of the general public.

For João Falcato, CEO of Oceanário de Lisboa and Director of the Oceano Azul Foundation “We decided to invest a further 50,000 euros this year due to the success of the first edition. It is essential to invest in knowledge and conservation of species that are at risk of no longer existing on our planet. We are proud to be able to make our contribution”.

The 1st “Ocean Conservation FUND”, on the theme of “Rays and sharks. From darkness to the light of science”, supported three projects, selected from among 23 applications: ‘IslandShark’, ‘Universidade dos Açores/OMA- Observatório do Mar dos Açores; ‘FindRayShark’ and ‘Shark Attract’, both from MARE - Centro de Ciências do Mar e do Ambiente. The three projects are being implemented and will have a significant impact on the development of skills and the capacity to protect rays and sharks.

Applications for the 2nd “Ocean Conservation Fund” are open until 13 July 2018.