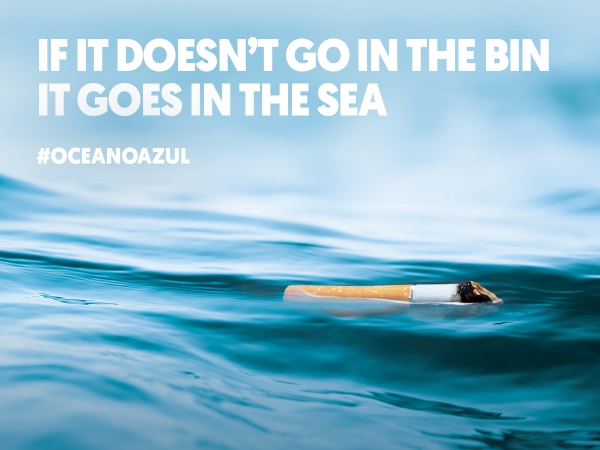 The new campaign “If it doesn’t go in the bin, it goes in the sea” led by the Oceano Azul Foundation with Oceanário de Lisboa, in partnership with Olá, was launched this month to raise awareness about our individual responsibility in preventing marine litter, particularly plastic pollution. This is one of the planet’s biggest environmental problems and the initiative aims to be a wake-up call. This is the Oceano Azul Foundation’s first advertising campaign. It aims to amplify information and literacy about the impacts of marine litter in ocean wildlife.

The campaign “If it doesn’t go in the bin, it goes in the sea” was designed to bring a new perspective about the importance of disposing garbage properly. Many people do not know that the litter disposed on the floor, into the toilet or deposited incorrectly, even far from the coast, may end up in the ocean. «There is not yet a clear awareness of the importance of disposing garbage in the right place to reduce ocean pollution. With this campaign, we aim at alerting people that their garbage may end up in the sea, thus threatening the marine environment and affecting millions of species irreversibly», says the CEO of the Oceano Azul Foundation, Tiago Pitta e Cunha.

With three TV adds the campaign will reach a large audience. The films, which are already in the Oceano Azul Foundation's Youtube channel and social networks, reveal the importance of changing individual behaviors to protect the ocean. The three stories depict common everyday situations in which, at the time of discarding a cotton bud in the toilet, a cigarette butt on the floor and an ice cream package on the beach, the characters involuntarily initiate a path that symbolizes the actual route that these discarded products can take until they end up in the sea. «The campaign messages are clear. If we do nothing marine litter will continue to kill thousands of marine animals every year. If we do nothing in 30 years there will be more plastic in the sea than fish» concludes Tiago Pitta e Cunha.

Plastic pollution is one of the biggest threats to the ocean. More than 8 million tons of plastic go into the ocean annually, the equivalent of dumping one garbage truck of plastic every minute. The effects are extremely negative for wildlife and marine ecosystems, with one million seabirds and 100,000 marine mammals dying every year from plastic pollution (source: Unesco, Intergovernmental Oceanographic Commission). There is a conviction that much of the litter that goes into the ocean is not intentional, but the result of unawareness. With this campaign, the Oceano Azul Foundation wants to encourage and involve the Portuguese public to unequivocally mobilize for a blue ocean (#oceanoazul).

Created by Sociedade Francisco Manuel dos Santos (SFMS), the Oceano Azul Foundation aims to contribute to a healthy and productive ocean to the benefit of our planet and to fulfill its mission it counts on the activity of Oceanário de Lisboa.