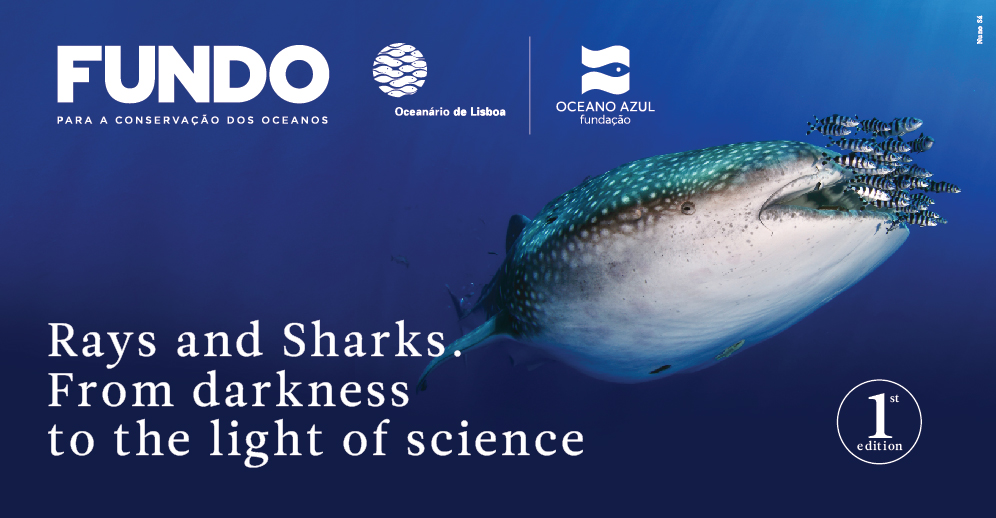 On the theme of "Rays and sharks. From darkness to the light of science", the 1st edition financed three projects, contributing a total of EUR 100 000 toward the conservation of these species (rays and sharks). This initiative sought to raise awareness on the conservation needs of this fish group, one of the most threatened on a global scale.

Due to over-exploitation leading to the vulnerability and decline in resilience of rays and sharks, the conservation of this threatened marine species must be a priority.

The international agencies overseeing the conservation of these species have warned of the need to integrate essential habitats (EH), such as breeding grounds, into management plans. However, these efforts have run up against the current lack of awareness about the importance of possible EH for Atlantic populations, and the potential impacts of fishing.

The project lslandShark - Oceanic lslands as Essential Habitat for migratory sharks, by University of the Azores | OMA- Observatório do Mar dos Açores, aims to answer the following question: are there breeding grounds for migratory sharks in the Macaronesian Archipelagos, and if so, what is their role in the resilience of Atlantic populations?

The project proposes a research plan focused on two key vulnerable migratory species, with distinct ecological and behavioural characteristics: the hammerhead shark and the tope shark. The research plan aims to:

| Combine classical approaches and techniques (catch-and-release and sampling) with remote underwater and aerial video surveys, biotelemetry (acoustic and satellite), genomics, and complex modelling to understand their spatial behaviour at different spatio-temporal scales, and map their EH;

| Take advantage of the Azores’s perfect location for researching sharks in their habitats;

| Leverage existing databases and samples, through the experience of the team in the proposed research areas.

The plan is based on non-invasive and non-lethal techniques, a key requirement for ensuring the well-being of endangered species as they are handled, and on state-of-the-art biotelemetry and genomics technology.

Between being a naturally vulnerable species and experiencing threats posed by overfishing, rays and sharks are currently at risk of extinction. Despite decades of research, our knowledge is still limited, and therefore hinders our ability to protect them.

The project FindRayShark - Applying innovative technologies to the conservation of rays and sharks, by MARE- Centro de Ciências do Mar e do Ambiente, aims to contribute to the conservation of rays and sharks on a global scale, by surveying their populations using an innovative and non-invasive technological approach. This approach will also contribute to improve the management of marine habitats and resources, and raise public awareness.

Rays and sharks face greater threats in the Northeast Atlantic than anywhere else in the world. Thus, this project aims to target two areas in this region to test the approach in different contexts: The Azores (where rays and sharks are more common) and the Berlengas (where these animals are rarely sighted).

The project has three objectives:

| Identify and survey ray and shark populations, measure their size and assess their value in different contexts;

| Propose management actions and best practices suited to the area under study;

FindRayShark is a high-impact scientific and social project, which aims to develop non-invasive technological methods, study rays and sharks, engage stakeholders and the general public in our shared responsibility to safeguard these marine species, and raise awareness of their important role in the functioning of ecosystems.

Fishing has been recognized as the main factor in the decline of ray and shark populations worldwide. The biological and ecological characteristics of most members of this fish group, in particular their low fecundity, slow growth, late maturation, and their position as top predators, among many others, mean they are not viable primary or secondary fishing species.

The project Shark Attract - Sharks and rays conservation by enhancing awareness within fishermen communities and society, by MARE- Centro de Ciências do Mar e do Ambiente, has the following main objectives:

| Promote the conservation of these species, creating and promoting ecological awareness about rays and sharks, through actions and activities specifically designed for certain target audiences: professional and recreational fishermen, school-age children and young adults, the general public, and managers and technical staff in public administration, in positions related to the marine environment and the conservation of these species.

| Engage fishermen in science outreach activities that raise awareness on the need to conserve this fish group;

This project is expected to generate substantial knowledge about ray and shark fishing in Portugal, which can help identify ways to mitigate its impact, and increase interest in these endangered species.